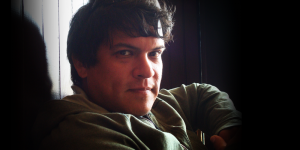 Born and raised in Dallas, TX, I have had the good fortune of making a living as an artist in one capacity or another for most of my adult life. In my early 20’s I studied jazz at UNT in Denton, Tx and worked as the guitarist and songwriter for an alternative band called The Love Remote. When we dis-banded in the mid 90’s, I embraced my love for film and video and started freelancing as a camera operator for independent producers, especially those who did music productions. To enhance my eye, I took a position as a product photographer’s assistant for two years while freelancing as a shooter for independent theater companies in the city.

In the early oughts I partnered with a good friend who was a budding producer and together we shot a feature-length documentary that I edited called “Extreme Orchestra!”. It was featured at the Hot Springs Documentary Festival.

After that, the next logical step for me was furthering my editing skills. I shot and edited for a local A&E broadcast show “Grin and Barrett” for two years and went on to freelance for companies like Broadcast News Corp and Eyecon Video. Video clients included: Cheaters, Bridezillas, Broadcast News Corp, Eyecon Video Productions, Wheelhouse PR and Marketing, Hunter Sullivan, Einstein Medical, Barking Harley Productions, Cinsay, Inc., FedEx and more.

I spent a few years as a production designer and did some freelance art department work for a couple of production companies. Since the late 90s I have worked on and off as a design assistant for Gregory Dean Designs, creating works of art, modern furniture, and various forms of applied design including custom canvas stretchers for Texas artist Otis Jones. Our clients include Razzoo’s, Bone Daddy’s, Cinsay, Inc., Otis Jones, and Barry Whistler Gallery.

Throughout all this time, I have always been a writer at heart, penning short stories and a handful of scripts. White Rock is my first completed novel. It is the first in a series that follows the life of it’s protagonist, the brilliant yet flawed Laura Milton, and her uncanny gift of communication with the dead.